The birth of a hot (pretzel) idea.

The story isn’t nearly unique as the pretzels. Randy and Becky met at a local ad agency over 20 years ago where he instantly fell in like with her. Maybe not instantly, but when they discovered their mutual passion for trivia (he asked Becky who Beaver Cleaver’s fireman friend was, and she responded, “That’s easy, everyone knows it’s Gus."), he knew she was the gal for him. And strangely, trivia is what led to the creation of Firestick Pretzels.

Each year in February, Randy and Becky hosted a team at their house that participated in an annual 50 hour trivia contest. Hosting team DOA Hole meant providing room and board for up to 20 people for the whole weekend; 3 meals each day and snacks. And beer. A lot of both actually. About 15 years ago, Becky was looking for recipe inspiration for the weekend and found one for seasoned pretzel twists that looked interesting. After a few adjustments of a few ingredients, including using sticks instead of twists, a trivia snack tradition was born! 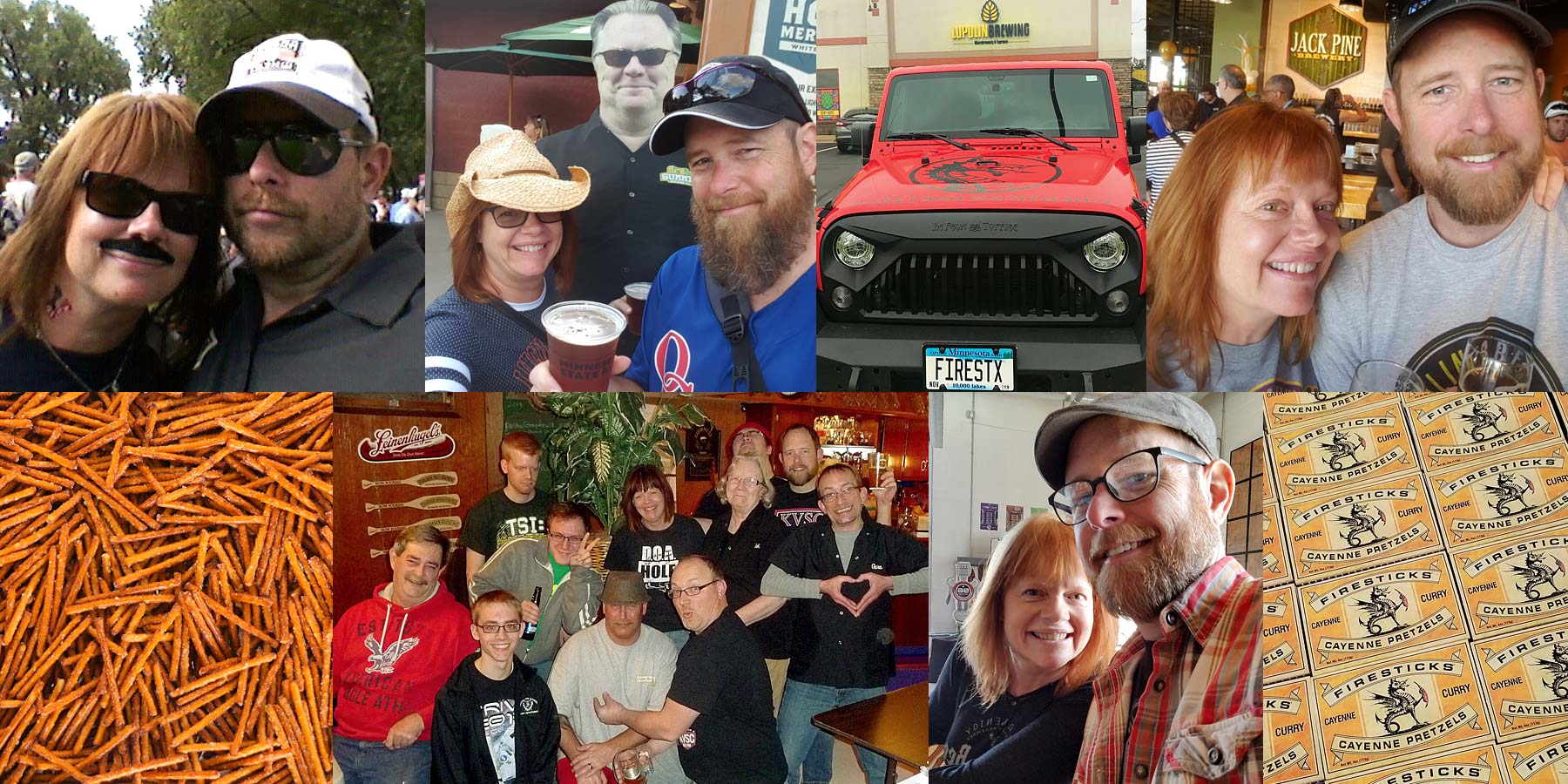 Craft beer and the quest for tasty snacks.

Fast forward to late 2016 when Randy and Becky noticed that the taprooms they visited, and they visited a lot, carried flavored pretzels for snacks. They tried a few varieties and thought that, frankly, theirs were better. On the drive home from one taproom visit, they bantered back and forth and came up with the name Firesticks since they’re spicy and sticks, pretty obvious, and that they should be packaged in something that resembled a vintage matchbox since they also resembled matchsticks. The next step was developing the logo, packaging, and the Firesticks brand. Their real jobs are in marketing, so this was the fun part.

As they starting moving forward with the nitty gritty of getting an actual product to market, they started thinking of other flavors that would go well with cayenne, the basis for all Firesticks varieties. Lime was first, then Curry. MN Mild followed after someone said that their daughter thought the regular flavor was too hot, then came White Cheddar. Lastly, and the most challenging, was Bloody Mary. Many batches and taste tests with friends were done until the day finally came when Becky tried a new variation, tasted them, walked upstairs to Randy’s office with a big smile on her face and proclaimed “I’ve got it!"

The real work was getting their brand trademarked, perfecting the seasoning recipes to taste just right with a bulk spice company, and finding a co-packer to make the pretzels. Everything was ready to go in last March, when, along with the rest of the country, the company was waylaid by COVID. Finally in May they their first shipment of 4 oz bags were shipped to their MN warehouse and were packaged in their distinctive matchboxes, and they’ve been landing in taprooms across the Midwest ever since!

The future of firesticks.

What’s next for Firesticks? There are a few plans in mind for the future. One that’s very important to both of them is the ability to give back and do some good. Once profitable, the company is going to establish a charitable foundation and donate 4% of net profits to support volunteer fire departments in small towns. All the details haven't been worked out yet, but they'll figure it out.